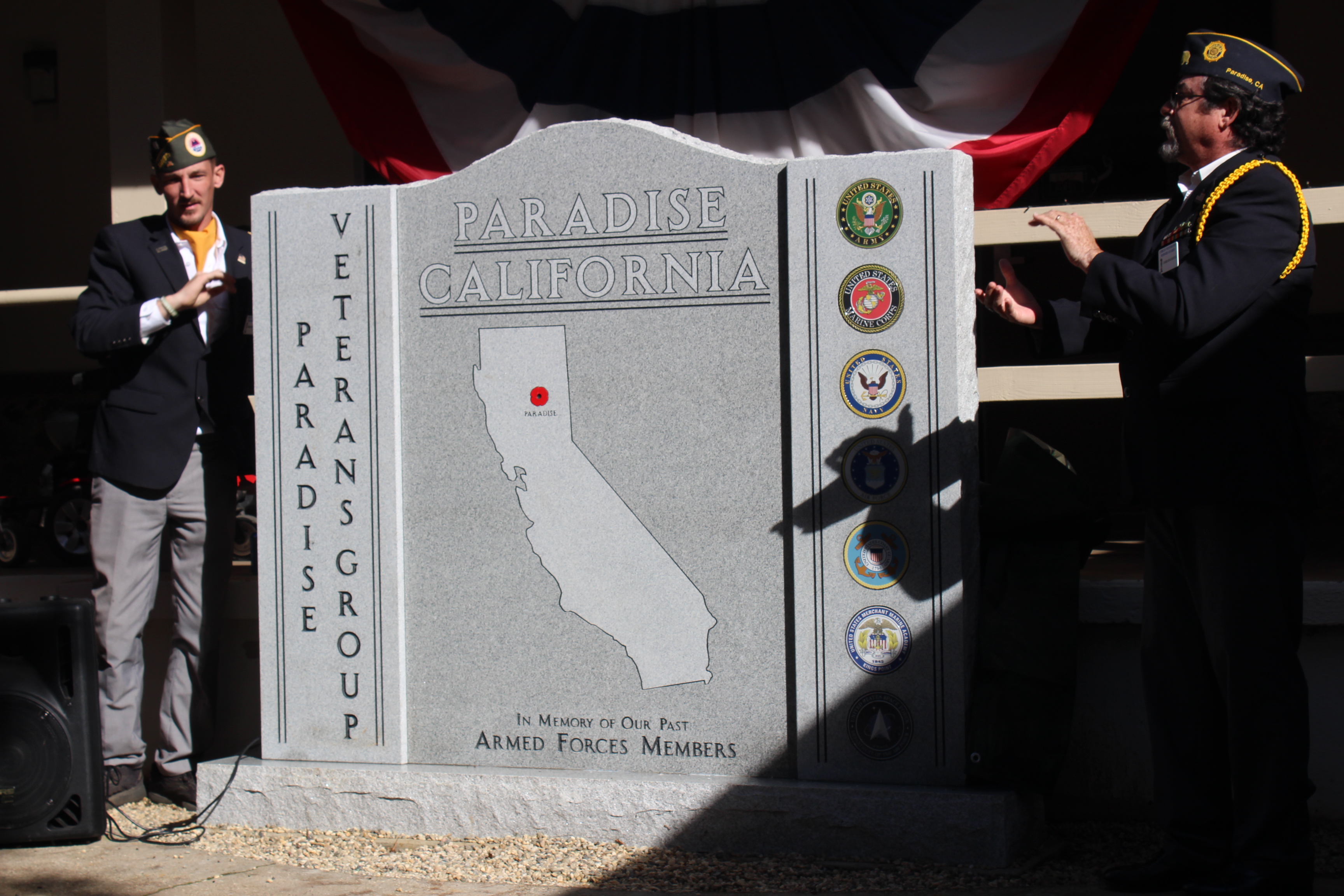 Ridge veterans gathered at the Paradise Veterans Hall late Thursday morning to honor those who have served in the military.

The event, which featured speeches from Paradise mayor Steve Crowder, and fifth district supervisor Douglas Teeter, ended with the unveiling of a new monument at the Veterans Hall on Skyway and Elliott.

After the opening ceremonies, which included the honor guard entering the hall, and the national anthem, and a short speech from Paradise Chapter Disabled American veterans commander William Lossande who was a colonel in the US Air Force, both Crowder and Teeter took turns at the podium to address the mostly full Veterans Hall.

Lossande gave the attendees a short history of Veterans Day, noting it started out as Armistice Day following World War I that ceased hostilities on Nov. 11, 1918, at 11 a.m. However, the war did not officially end until the Treaty of Versailles was signed.

“The intent is to remember that 11, 11, 11 and just a holiday,” he said. “It’s to remember those who have served this country and to protect your rights.”

But after World War II and the Korean War, Congress realized that it needed to change the day to Veterans Day because it was not just about the end of  World War II.

In the late 1960s, Congress move Veterans Day to Monday in order to give government workers and others a three-day weekend.

But due in part to veteran objections, President Ford in the mid-70s signed legislation that returned Veterans Day to November 11.

After LaGrande was done, he brought up Crowder to the podium.

Crowder’s speech focused on mini Paradise residents who have entered the military and fight for the country.

“I am reminded of the high price Paradise paid in our conflicts the price by those who fought in World War II, Korea, Vietnam and our wars in the Middle East,” he said. “A price paid because of the willingness of Paradise’s sons and daughters to serve in the Armed Forces.”

Crowder noted that since George Washington led the original Continental Army, more the 40 million Americans served in it and a more than million have died.

Teeter’s speech focused on the services that Butte County offers its veterans within the community. He noted that the county’s Veterans Services Office, which offers many services to veterans, including maintaining the Veterans Hall in Paradise.

Some of those services include getting discharge documents (DD214), the California College Tuition Fee Waiver, getting information and referral for Employment, Public Assistance, VA Medical Care, Benefits, Education, and Housing. They also administer the Butte County Veteran ID Card Program,

After Teeter finished his speech and God Bless America with song, the indoor portion of the event was finished, and those attending went outside to watch the unveiling of the monument by Lawrence St, Germain.

The monument was built with the help of the Veterans Services Office, PG&E.

After the unveiling of the monument, there was a  speech by Marine Ray Flores, who thanked the men who helped him become a better man, including Paradise’s Nigel Parkhurst.

And then a 21 gun salute followed with the playing of tabs ended the day’s events.