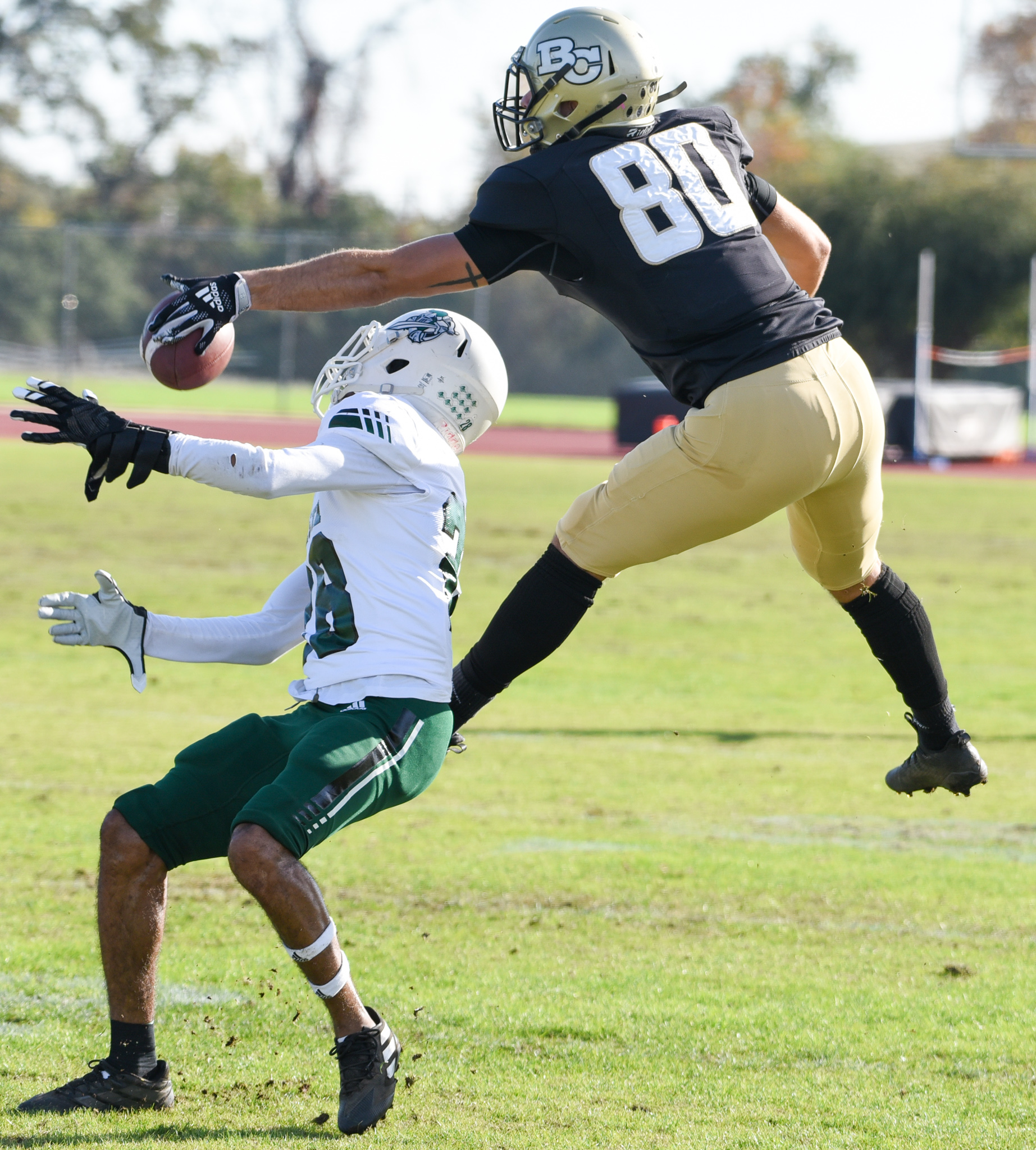 BUTTE VALLEY — Entering Saturday’s regular-season finale the Butte football team as a whole had a goal of going 1-0. The Roadrunners needed a win Saturday against Shasta, and help from several other teams to keep their California Community College Athletic Association playoff chances alive.

At practice Friday, Butte coach Robby Snelling said the strength of this year’s team is its ability to get better each week. Butte began its season with back-to-back wins before losing three straight. The Roadrunners (6-4, 4-1 CCCAA) won five of their last six games, all conference matchups. Snelling said on offense, defense and special teams there has been a tremendous amount of growth.

That growth culminated to a 49-6 win for Butte at home Saturday against Shasta in the Roadrunners’ regular-season finale. With the win, Butte earned at least a share of the NorCal Conference championship.

The Roadrunners had six touchdowns on offense, their defense had six sacks including one strip sack that was returned for a touchdown, three interceptions by their defense and one punt block on special teams.

“That’s what you coach for. To see that kind of improvement from week-to-week, that’s what coaching’s all about,” said Butte defensive coordinator Kevin York. “It’s all about the kids putting in the work and doing what you ask them to do. My group, the defensive line, they’ve done what they’ve been asked to do and they worked their butts off.”

York told his defensive line that they deserve a piece of the conference championship because they earned it. It was not given to them.

Butte running back Johnny Williams entered the game determined to continue his strong second half of the season after a slow start. Williams did not score or have a game with 100 or more rushing yards in any of Butte’s first four games, but the sophomore finished the final six games of the regular season with games of 100 or more rushing yards in four of the six games including Saturday.

Williams entered Saturday’s games 170 yards short of 1,000 rushing yards on the season, and although he finished the game with 104 yards rushing, he scored three first-half rushing touchdowns and secured the No. 1 spot in rushing scores in the NorCal Conference with nine.

“Johnny’s always run hard and that’s been one of the things why he’s in the position he’s in,” Snelling said. “At the end of the day Johnny knows what he needs to do, he knows his assignments, he plays extremely hard, he’s a physical runner and he had some great finishes on those runs and he found his way to the end zone.”

Snelling was sure to compliment the play of his offensive line as well Saturday.

“No tailback has ever done anything without an o-line or tight ends or receivers blocking for him so I’m proud of how those guys played,” Snelling said.

The first quarter was scoreless and included Butte and Shasta exchanging interceptions halfway through the quarter. Butte quarterback Brian Harper was picked off by Shasta’s CJ Catia, and on the ensuing play, Zach Macintire intercepted Shasta’s quarterback Toren Tuttle.

“The first half of the season I wasn’t like myself so I had to,” Williams said about the performance Saturday. “I finally got in the groove, everything started flowing and we just started executing plays more and making blocks.”

At the start of the third quarter, Butte sophomore defensive lineman Steven Bryant stripped the ball from Tuttle on a sack and linebacker Tucker St. Andre scooped the ball up and returned it 28 yards for a touchdown to increase Butte’s lead to 28-0.

Bryant, Devon Mills, Lathun Snipes and Grant Ewell had one sack each, and Grant Garretson and Ronald Nieto had two sacks each for Butte. Enrique Correa had a team-high seven tackles for Butte, Ewell had six and Mills had four. Ewell, Macintire and Jamal McMurrin each had an interception.

Butte’s final two scores came on a five-yard shuffle pass from quarterback Tanner Hughes to Conner McKenzie from five yards out, and with 12 seconds to play freshman running back Caleb Ramseur found a hole and scored from 33 yards away. The Roadrunners nearly had a shutout, but Shasta’s Reyjon Williams had a 65-yard kickoff return for a touchdown as time expired.

“In a way, a lot of things came together. We had a lot of big plays,” Snelling said. “A lot of different guys making big plays. We know we have a lot of guys with a lot of talent and for us to put it together on a level we did today is what we’ve been looking for.”

Snelling said the team talked about a statement win in Butte’s final game of the season a lot this week of practice. He said with some sophomores having been with the program for four years since 2018 after the pandemic.

“There’s a lot invested on their part so we wanted to finish it the right way and send the sophomores out,” Snelling said.